Despite increased education, the number of skin cancer cases continues to rise. The Dermatology & Laser Center of San Antonio™ is committed to the prevention, early detection and treatment of skin cancer.

Actinic keratoses or solar keratoses are considered the earliest stage in the development of skin cancer. They are small, scaly spots most commonly found on the face, ears, neck, lower arms, and back of the hands in fair-skinned individuals who have had significant sun exposure.

BCC  is the most common and least serious of the three. It often begins as a small blemish or pearly-appearing bump that can bleed easily. While BCC has little ability to spread (metastasize) to other parts of the body, it can be locally destructive, growing and eating away normal skin and underlying tissue. It is most common on the head and neck area.

Squamous cell carcinoma (SCC) is the second most common skin cancer. SCC can metastasize but usually only in long-ignored tumors or those located in certain danger zones such as the ears and lips. Most patients first notice an SCC as a hard bump, something like a wart or a callous. It is locally destructive and common on the head and neck area, and the backs of the hands and arms.

Malignant Melanoma is much less common, but much more serious. Often called the “mole cancer,” melanomas can appear as a pre-existing mole that starts changing or as a new, often dark, spot that is changing rapidly. Melanoma can metastasize widely, and is responsible for most skin cancer deaths. Melanoma can occur anywhere on the body, including areas that don’t normally get much sun. Do you know your ABC’s? A,B,C,D’s of Melanoma 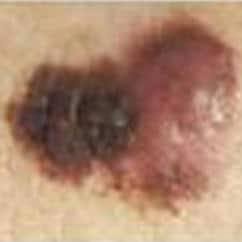 The key to surviving skin cancer is to find it as early as possible. Self-exams (click here for directions on how to perform a self-exam) of all areas of the skin, especially those exposed to sunlight, and professional examinations by your physician are most effective. Routine exams will help you detect these warning signs.

The most effective form of prevention is to protect yourself from the sun. That Means:

Established in 1983, the Dermatology and Laser Center of San Antonio™specializes in general dermatology for adults and children, including detection and treatment of skin cancer, cosmetic, and laser procedures.

Our practice provides complete medical, surgical, and cosmetic services for the entire family. We encourage you to explore our website, telephone us with your questions, or better yet, call us to schedule an appointment.